Be aware of phone calls and fraudulent texts like these examples below that appear to be from Stockman Bank.  These are scams!

If you receive a phone call asking for your Stockman Bank login credentials or personal financial information, HANG UP! We will never call you and ask you for this information.

If you receive one of these texts, DO NOT click the link. These texts are not sent by Stockman Bank.

If you accidentally gave out your personal information over the phone or clicked on one of these links, please call us immediately at 877-300-9369. 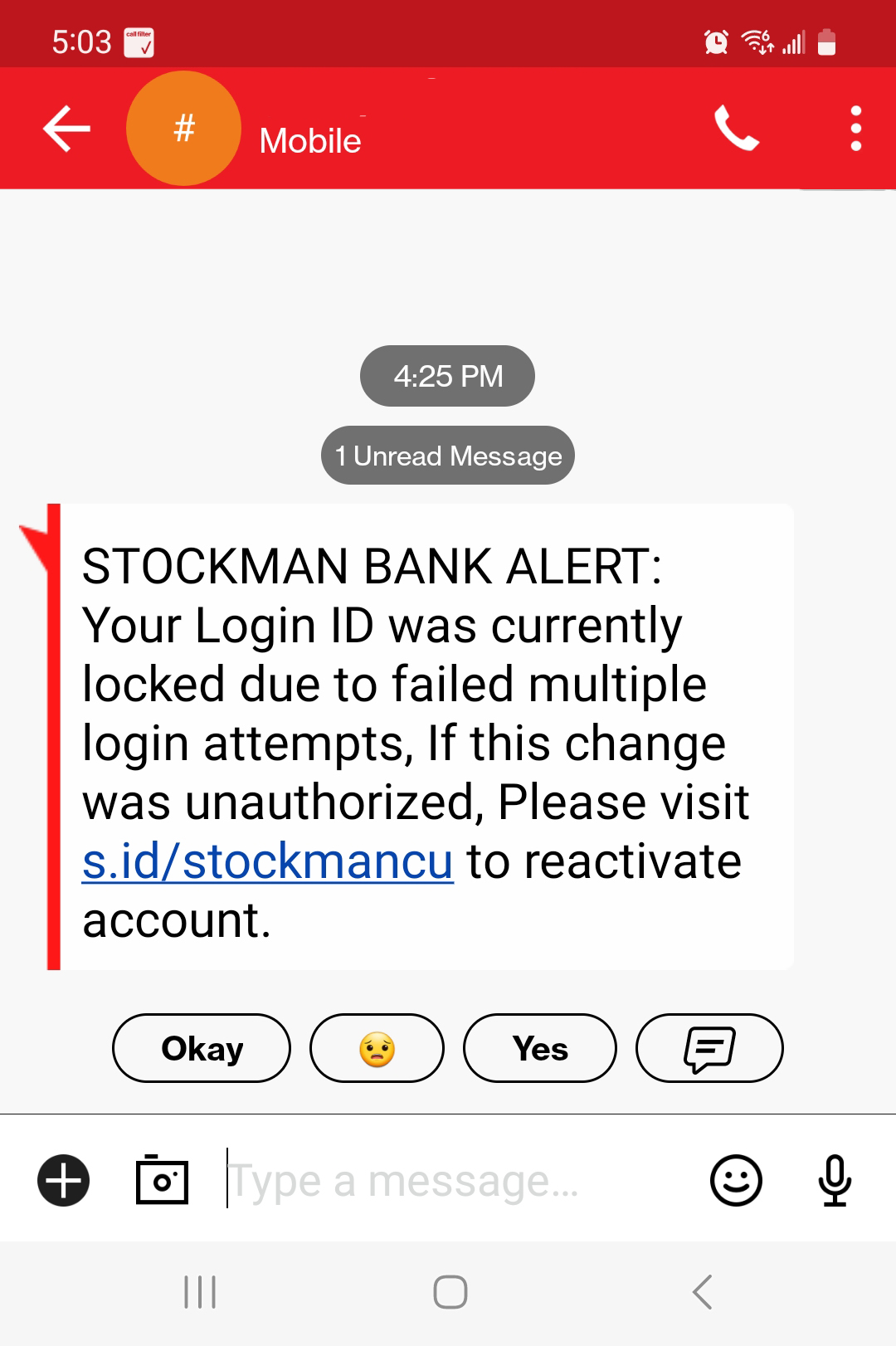 IF YOU SUSPECT FRAUD:

Too Good to Be True Scams

Your Security Is Our Priority

How You Can Protect Yourself

Protect Yourself Against Money Mule Scams

In fact, many bring their unsuspecting victims in on the scheme and make them do the majority of the work….and this can oftentimes leave their victims penniless.  This twisted tactic is known as a “money mule” scheme.

WHAT IS A MONEY MULE?

A “money mule” is a person who has been recruited by a criminal to launder stolen cash or goods, or even to steal debit or credit card information to perpetrate fraud.  Several repercussions are at stake when a victim is sucked into a money mule scam. Some of the consequences are;

JANE’S STORY: ROMANCE AND FRAUD
{*Based on a true event with names and some details changed.}

My name is Jane and I was, unfortunately, a victim of a romance scam.  In April of 2016, I received a message on Facebook from a man named John.

I hesitated to reply because I have never responded to a man online before. Curiosity got the best of me and that was the beginning of a new whirlwind romance.

John and I exchanged photos; he was very handsome, charming and complimented me constantly on how beautiful and amazing I was.  I was delighted to have finally found a man who knew how to properly treat a woman.

John and I talked every day sometimes for several hours.  I learned that he was a widow with a 13-year-old daughter who he adored.  John was originally from Northern California but his career took him to the oil fields of Nigeria.  He was in the middle of wrapping up a very long and successful career in Nigeria and often spoke of his desires to find a companion who would love his daughter as her own.

One evening while John and I were chatting on the phone, John confessed his love for me and his dream of relocating to my small Montana town.  During this conversation, he asked me to marry him!  I was elated and so very in love.  Of course I said yes and couldn’t wait for him and his daughter to join me to live out my happily ever after.

Six months after the proposal I received a panicked call from John saying that he and his daughter were in a horrible car accident and that his daughter was in critical condition.  The hospital was demanding payment in advance for her care and his money was tied up in an account in California.

He was going to have his assistant send me money from his account in California so that I would then turn around and wire the funds to the doctor caring for his daughter.  Sounds reasonable right?  I received a wire into my account and then proceeded to follow John’s instructions to wire the funds out to the doctor in Nigeria and prayed that his daughter would pull through.

John’s daughter did pull through and as a result needed very extensive rehabilitation.  This was costly and required me to continue to receive wires from his California account and send the money onward to various doctors who were caring for her needs.

Several months and several wires later a representative from the fraud department of my bank contacted me concerning my account.  She stated that the bank sending the wires into my account had contacted her and confirmed that the money coming into the account was from their account holder who was a victim of a lottery scam.

The victim believed that they were sending funds towards taxes and fees to collect lottery winnings.  My bank explained to me that I was being used as a “Money Mule” to transfer the money to the scammer. I was so devastated that I was tricked and taken advantage of in this way.  The next day I shut down my Facebook account and will never respond to anyone on social media again.

WHAT ARE THE MOST COMMON MONEY MULE SCHEMES?

One of the best ways you can avoid falling into this trap is to familiarize yourself with the warning signs, which may not always be easy to spot.  Keep your eyes peeled for these common types of money mule scams:

“Card cracking”
The scam starts off with someone contacting you on social media asking if you want to make some quick and easy money. The con artist then lures his victims into providing their online banking credentials, debit card number and PIN.  The fraudster uses the information to deposit fraudulent funds into the checking account and then quickly withdraws it with a fraudulent card.  When the deposit is returned it leaves the account holder accountable for the money to the bank for the bad check.

Romance Scams
Involves phony online relationships that deceive the victim into handing over their individual cash or move funds from someone else who is a victim of from another scam.   Just as Jane had, once the victim agrees to send/receive money or packages on the requestor’s behalf, they’re now tangled up in the ugly money mule web.

Are You Sure You Want To Leave Our Site?

Stockman Financial Corp. does not provide, and is not responsible for, the product, service, overall website content, security, or privacy policies on any external third-party sites. These sites may not be conformant with current ADA requirements. If you click “Yes, Continue,” an external website that is owned and operated by a third-party will be opened in a new browser window. If you click “No, Stay Here,” you will be returned to our Website.
Yes, Continue No, Stay Here